One dad was highly educated and intelligent; he had a Ph.D. and had completed four years of undergraduate work in less than two years. He then went to Stanford University, the University of Chicago, and Northwestern University to do his advanced studies, all on full, financial scholarships.

My other dad never finished the eighth grade. Both men were successful in their careers, working hard all their lives. Both earned substantial incomes.

Yet one dad struggled financially all his life and the other dad would become one of the richest men in Hawaii. One died leaving tens of millions of dollars to his family, charities, and his church. The other left a legacy of unpaid bills. Both men were strong, charismatic, and influential. Both men offered me advice, but they did not advise the same things.

Having two dads as advisors offered me the perspective of contrasting points of view: one of a rich man and one of a poor man. The problem was that my rich dad was not yet rich, and my poor dad not yet poor. Both were just starting out in their careers; both were struggling with money and families.

But, regardless of those commonalities, both had very different points of view on the subject of money.

I had to think about each dad’s advice and, in doing so, gained valuable insights into the power and effect of one’s thoughts on one’s life. For example: My poor dad had a habit of saying, “I can’t afford it.” My rich dad forbade those words to be used. He insisted that I say, “How can I afford it?” One is a statement, the other a question. One lets you off the hook; the other forces you to think. My rich dad would explain that by automatically saying the words “I can’t afford it” your brain stops working. By asking the question “How can I afford it?” your brain is put to work.

My rich dad did not mean ‘buy everything you wanted.’ He was, though, fanatical about exercising your mind â€“ the most powerful computer in the world. My rich dad said: “My brain gets stronger every day because I exercise it. The stronger it gets, the more money I can make.” He believed that automatically saying “I can’t afford it” was a sign of mental laziness.

Although both dads worked hard, I noticed that my poor dad had a habit of putting his brain to sleep when it came to money matters. My rich dad, on the other hand, made a habit of exercising his brain. The long-term result was that one dad grew stronger financially and the other grew weaker.

Our Thoughts Shape Our Lives

Being a product of two strong dads allowed me the luxury of observing the effects that different thoughts have on one’s life. I noticed that people really do shape their lives through their thoughts.

The power of our thoughts may never be measured or appreciated, but it became obvious to me as a young boy that there was value and power in being aware of my thoughts and how I expressed myself. I noticed that my poor dad was poor not because of the amount of money he earned “which was significant” but because of his thoughts and actions. As a young boy, having two fathers, I became acutely aware of being careful in deciding which thoughts I chose to adopt as my own and to whom should I listen â€“ my rich dad or my poor dad?

At the age of nine I decided to listen to and learn from my rich dad about money. In doing so, I chose not to listen to my poor dad â€“ my real dad â€“ even though he was the one with all the college degrees.

One of my dads was a multimillionaire. The other was a poor man. Why? Very simply, it comes down to their respective attitudes toward money and life. Take a look at the differences… and think about where you fit… 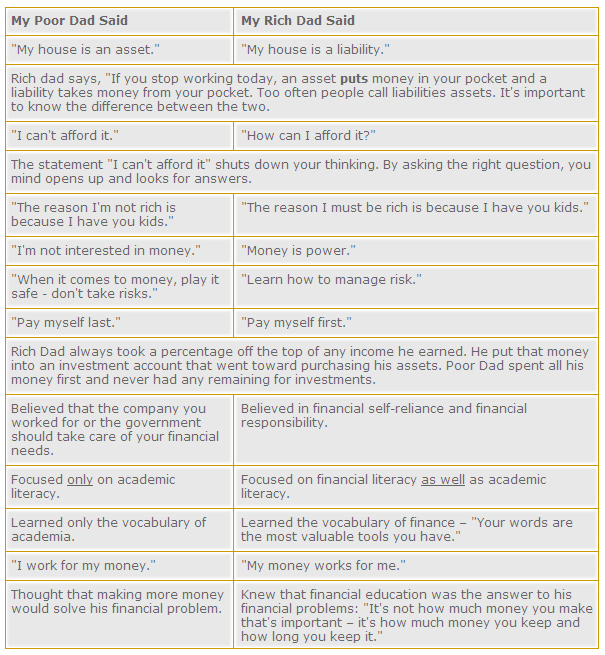 Understanding the difference in attitudes between Rich Dad and Poor Dad is essential to taking the first steps to financial freedom.

For a comprehensive look at how to battle the Poor Dad mentality and adopt the Rich Dad state of mind, learn more about the tools we offer to help you on your journey to financial freedom.

How do you think about that? All difference is real, so which kind of Dad will you choose? It’s all up to you, isn’t it?

This site uses Akismet to reduce spam. Learn how your comment data is processed.

Get Notified When We Publish The New Articles - It's Free!! Enter your email, Signup, Check your email, then Confirm...